We are finally back on our bikes. Carefully researching our route out of Hanoi saved us some stress as we managed to get out of the worst of the traffic without getting lost — and by the time we did get lost the first time we were in a suburb where it was less stressful. After that, we enjoyed about a 25 to 30 km cycle to Bac Ninh, paralleling Highway 1 rather than riding it. We found the shoulders very wide, the drivers very used to negotiating around small vehicles, and traffic moving at slower speeds than it does on highways in North America. It is anarchy as people ignore most traffic rules — motorcycles ride the wrong way down the street sometimes and people turning from a side street onto a main street don’t look to see what’s coming – its up to drivers on the main road to keep an eye on side street intersections. However, anyone who can ride the Pacific Coast Route in California can ride in Vietnam, at least as far as dealing with the traffic is concerned. The downside is pollution and noise. I bought a mask to filter out the worst of the dirt – these are worn by many of the motorcycle drivers and are so common they are a fashion accessory (you can get matching helmets).

We got ourselves completely lost getting out of Bac Ninh where we were supposed to pick up highway 18. We ended up on highway 38 and quite a few kilometres on our way before we realized we were headed the wrong way. With a lot of trouble because we don’t speak Vietnamese and no one speaks English, we asked for directions and managed to get on a dyke road that parallels the river and which eventually took us to highway 18. Except for a little trepidation about being truly lost in what felt like the middle of nowhere, the ride was pleasant as it was a narrow concrete rural road with very little traffic. We saw more cows and pigs on the road than we did people (and very nice fat little pink pigs and healthy looking brown cows they were). There were small villages off the dyke road all the way to Pha Lai where we eventually got to highway 18. I wish I had stopped to take photos now as there was some interesting architecture in the villages — some take on French colonial in a very rough style. Some of the buildings had small turrets – strangely European. The one village we did stop in to buy water was very third world. Reminded me of some small villages in some of the remoter parts of Mexico I have visited – narrow lanes and crumbling brick buildings, very few commercial buildings if any.

The first night on the road we ended up in Pha Lai, a small town whose claim to fame is a coal-driven power plant. They don’t get many western tourists. We learned that Nha Nghi means hotel and paid 20.00 for a room that wasn’t worth that but after 93 km we weren’t going to argue. The room was big, had an Asian-style shower but western toilet, big windows that opened onto the street and air conditioner and a fan. The bed was like a rock (many of them are – a little too much for Ian’s liking) but I don’t mind that. I was more suspicious of linen though and was glad I had my sleeping sheet from our camping days. After Ian’s bad night sleep we were sorry we hadn’t thought to pull out his air mattress which we are also still hauling around. The only other issue with the room was that it had Asian plumbing (bad) and water leaked out under the bathroom wall into the bedroom and unfortunately onto our road Atlas of Vietnam. We salvaged some of it but this is a bit of a problem now as I am guessing it will be hard to come by another one outside of Hanoi.

Our first menu mishap happened in Pha Lai. We were proud of ourselves for using the Vietnamese phrasebook to find a restaurant. All good. We were the only people there – still ok . There was a menu with no English but it had dishes by meat category, and showed pictures of the meat categories by animal (including dog and cat.) We chose the chicken. Safe we thought. Then we flipped the menu page and saw a picture of what I thought was a plate of vegetables. We ordered. The owner looked at us quizzically on our second choice but we persisted, pointing again. She shrugged. We munched our way through some greens but also some relatively small bones with white meat and figured perhaps it was some kind of bird until we saw a piece of spine that could only belong to an animal. We hope it was rat and not dog. Probably the right size for rat….Argh. So I am now very motivated to learn the food words…as this will be what we get on the road for the most part. Vietnam is not very developed outside the tourist areas. However, we certainly know the word for pho and this is always the fallback. It is also what everyone here eats for breakfast everyday and what we also ate the next morning when we were leaving Pha Lai.

We cycled another long day to get to Ha Long Bay where we misread the map and took ourselves over a large span bridge that crosses the bay. The whole area is called Ha Long City but it is composed of two parts: Bau Cai and Hong Gai. We ended up spending the night in Hong Gai, which wasn’t a bad experience – very nice three star hotel for 30.00, completely westernized, which I think is used by higher-level bureaucrats. There was a nice looking night market out in front of our building but we opted for a more western choice for dinner as we were still getting over our rat experience.

We are now in Bau Cai (back over the bridge) in a tourist area. We’ve found decent (though somewhat Asian plumbing) digs for 15.00 a night and we are resting up for another day and then getting a boat tour and transport to Cat Ba Island that will take us through the limestone karst formations the bay is famous for.

Overall I like being on the road again on the bikes. It is kind of rough travel and it takes some getting used to. We both think we will feel about Thailand the way we did after cycling in Cambodia – after Cambodia Thailand felt like an oasis of western comforts. Vietnam is much more together than Cambodia but it is still very much a developing country. Wages are low for many people – the average school teacher makes 168 US a month here. There are just not the amenities here yet that there are in Thailand (like supermarkets, corner stores, department stores etc.) For the most part people are happy to see us on the road and give us the thumbs up. We certainly got some double takes and chuckles on the rural road when we were lost ☺

The claustrobphobia has diminished quite a bit with antibiotics and anti-inflammatories working to reduce the sinus issues. It wasn’t the small spaces making it difficult to breathe – I was struggling to breathe period. I should have looked after that a long time ago but it is hard to get antibiotics from my doctor unless there is some kind of positive on a throat swab…but given I am getting better there must have been some kind of infection for some time.

For anyone cycling out of Hanoi to HaLong Bay

North end of Hoan Kiem Lake take Hang Dao (the night market street). It is one way in the right direction. The street changes names part way (Hong Giay). You will pass the market building and go under the railway. You’ll come to an intersection with a grey concrete turret building (don’t know what it is). Turn right on Hong Dau. At the first T intersection (perhaps more of a three way intersection) head across the street and up onto the ramp onto the railroad bridge. There is a bicycle sign on the ramp. Cross the bridge and go under the railroad bridge (on Ngoc Thuy). Continue south until you get to the next main bridge (it is not far maybe 500 metres to one km) then turn left on Nguyen Van Cu. This is a main drag that takes you out of town to Bac Ninh. The road changes names a number of times and you will pass through a few towns including Tu Son. You pick up highway 18 to HaLong from Bac Ninh. 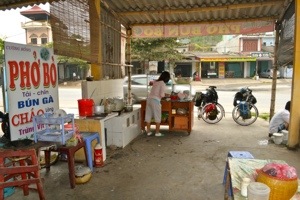 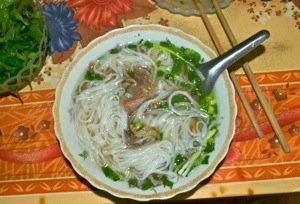 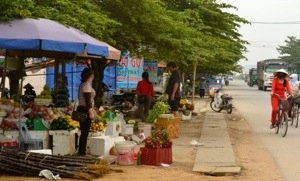 View all posts by susan901